Ashley Tisdale is an American actress and singer. She is best known for her portrayal of Maddie on Disney’s The Suite Life of Zack & Cody, and for her performances in the High School Musical film series. She had a leading role in the CW’s series Hellcats and starred as Jody Sanders in the feature film Scary Movie 5. She provided the voice of Candace Flynn in the Disney Channel animated series Phineas & Ferb. Tisdale’s debut studio album, Headstrong (2007), debuted at number five on Billboard 200, earning a gold certification from the Recording Industry Association of America (RIAA). Born Ashley Michelle Tisdale on July 2, 1985 in West Deal, New Jersey, to parents Lisa and Mike Tisdale, she is the younger sister of actress Jennifer Tisdale. She is of Ashkenazi Jewish descent on her mother’s side, and of English, Irish, Scottish and German descent on her father’s side. Ashley made her acting debut at age 12 with small roles in the 1997 television series Smart Guy and 7th Heaven. On September 8, 2014, Ashley married her boyfriend of 21 months Christopher French following a 13 month-long engagement. 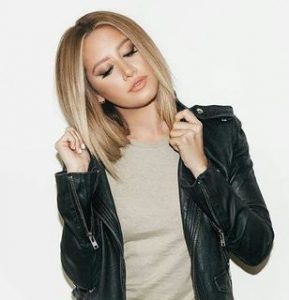 Ashley Tisdale Facts:
*She was born on July 2, 1985 in West Deal, New Jersey, USA.
*Her parents are Lisa Tisdale and Mike Tisdale.
*Her father is Christian, and her mother is Jewish.
*Her older sister, Jennifer Tisdale, is also an actress.
*She started her career in 1988.
*As a child, she was featured in over 100 advertisements and had minor roles in television and theatre.
*She was a Ford Model along with Mischa Barton and Lindsay Lohan.
*She was ranked #10 in Maxim’s Hot 100 list in 2008.
*Her favorite movies are Just Married, My Best Friend’s Wedding, and How to Lose a Guy in 10 Days.
*She is a StarPower Ambassador for the Starlight Children’s Foundation.
*She is good friends with both sisters Haylie Duff and Hilary Duff.
*She is friends with Carlos PenaVega.
*She dated Scott Speer from 2009 to 2011.
*Visit her official website: www.ashleytisdale.com
*Follow her on Twitter, Pinterest, YouTube, Facebook and Instagram.