Meg Donnelly is an American actress. She is best known for her portrayal of Ash in the Netflix comedy series Team Toon, and for her role as Taylor Otto in the ABC sitcom American Housewife. In 2017, Donnelly appeared as Lilly Kelly in the feature film The Broken Ones. She is also known for starring as Addison in the Disney Channel Original Movie Zombies and its 2020 sequel, Zombies 2. As a singer, Donnelly has sung in several productions in New York such as Kids of the Arts, Broadway Kids and Time To Shine. Born Meg Elizabeth Donnelly on July 25, 2000 in New York, New York, to parents Elizabeth and Michael, she is an only child. At the age of 6, Donnelly began training in singing, dancing, and acting at Annie’s Playhouse School of Performing Arts. She has been romantically linked to actor and dancer, Noah Zulfikar. 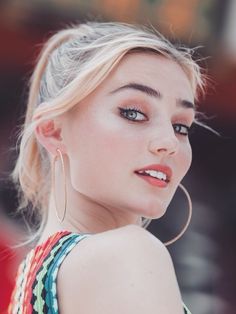 Meg Donnelly Facts:
*Born on July 25, 2000 in New York, New York, she grew up in Peapack, New Jersey.
*She’s an only child.
*She is best friends with Diedrich Bader.
*Her celebrity crush is Chris Hemsworth.
*She enjoys surfing and scuba diving.
*She has two pet cats.
*Visit her official website: www.megdonnelly.com
*Follow her on Twitter, YouTube, Facebook and Instagram.