Blake Shelton is an American country singer, songwriter and television personality. He is best known for the hits “Some Beach”, “Ol’ Red”, “Hillbilly Bone”, “Drink on It”, “God Gave Me You”, “Honey Bee”, and “Kiss My Country Ass”. His single “Austin” reached #1 on the County Billboard for five weeks in 2001. His first three albums: Blake Shelton (2001), The Dreamer (2003), and Blake Shelton’s Barn & Grill (2004) were Gold-certified. He also served as a judge on the televised singing competitions Nashville Star, Clash of the Choirs, and The Voice. Born Blake Tollison Shelton on June 18, 1976 in Ada, Oklahoma, USA to Dorothy and Richard Shelton, he started singing and playing guitar at a very early age and wrote his first song at age 15. He moved to Nashville when he was 17 to become a country music songwriter. His older brother Richie died in a car accident on November 13, 1990. He has been in a relationship with pop singer Gwen Stefani since October 2015. He was previously married to country singer Miranda Lambert and Kaynette Gern. 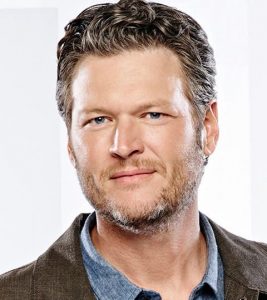 Blake Shelton Facts:
*He is of English, distant German, and Dutch descent.
*He began singing at a very early age.
*He lost his older brother Richie in a car accident on November 13, 1990.
*He earned a Denbo Diamond Award in Oklahoma at age 16.
*He has been a judge on The Voice since April 2011.
*In 2017, he was voted sexiest man alive by People magazine.
*Garth Brooks is his biggest musical inspiration.
*Visit his official website: www.blakeshelton.com
*Follow him on Twitter, YouTube, Google+, Facebook and Instagram.