Ben Shapiro is an American journalist, political commentator, radio personality, author, and lawyer. He is known for being a vocal conservative with the daily political podcast called The Ben Shapiro Show. He also serves as editor-in-chief for the right-leaning news site The Daily Wire and writes a column for Creators Syndicate. He has written several books including Project President: Bad Hair and Botox on the Road to the White House. Born Benjamin Aaron Shapiro on January 15, 1984, in Los Angeles, California, to David Shapiro, he graduated from high school at age 16 and graduated from the University of California, Los Angeles and Harvard Law School. His first book, titled Brainwashed: How Universities Indoctrinate America’s Youth, was published in 2004. He has three sisters. He has been married to Mor Toledano since July 8, 2013. Together they have one daughter, Leeya Eliana Shapiro. 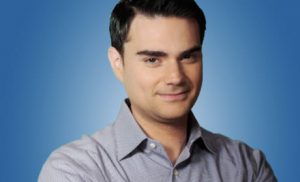 Ben Shapiro Facts:
*His family is Jewish, having immigrated in part from Russia.
*He is the nephew of Suzie Wilson, and cousin of Mara Wilson and Daniel Ben Wilson.
*He graduated from Yeshiva University High School of Los Angeles in 2000 at age 16
*He married Mor Toledano, an Israeli citizen of Moroccan descent in 2008.
*Follow him on Twitter, Facebook and Instagram.