Benji Madden is an American guitarist and vocalist for The Madden Brothers and the band Good Charlotte, which he co-founded in 2011 with twin brother Joel. Born Benjamin Levi Combs in Waldorf, Naptown, Maryland, he is the son of Robin Marie Madden and Roger Paul Combs. He is of English, as well as Irish, Scottish, and German descent, and has an identical twin, Joel Madden, with whom he formed the band Good Charlotte. He has an older brother named Josh and a younger sister, Sarah. He married actress Cameron Diaz in January 2015. 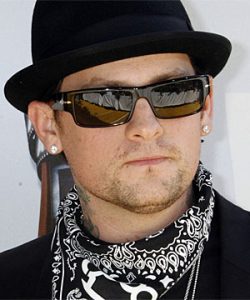 Benji Madden Facts:
*He is of English, as well as Irish, Scottish, and German descent.
*He is older than Joel by 5 minutes.
*Before becoming a guitarist, he was a shampoo technician.
*He owns his own clothing line, DCMA Collective.
*Apart from being a musician, he is a DJ too.
*After receiving his first paycheck, he purchased a boxer named Cashdogg.
*He has Cameron Diaz’s name tattooed across his chest.
*Follow him on Twitter, Facebook and Instagram.