Bethan Wright is a British actress and model. She is best known for her portrayal of Chloe in the CBBC series Dixi, and for her role as Danielle Clark in the Disney Channel musical drama The Lodge. Wright played minor roles in two feature films, Breakdown and Between Two Worlds. She also provides the voice of Prunella Pug on the Disney Channel cartoon 101 Dalmatian Street. Born on January 30, 1996 in Northampton, United Kingdom, she enjoyed horse riding and the outdoors as well as skiing trips and snow boarding sports growing up. Starting at age 4, Wright began taking ballet and tap classes, and took part in various talent shows. She later moved to London and studied acting and singing at Sylvia Young Theatre School. 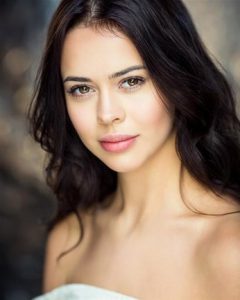 Bethan Wright Facts:
*She was born on January 30, 1996 in Northampton, United Kingdom.
*Growing up, she was a horseback rider and fan of winter sports like skiing and snowboarding.
*She became the face of Pretty Polly’s sleepwear and lingerie collection
*She played Chloe in the CBBC series Dixi from 2014 to 2015.
*Follow her on Twitter and Instagram.