Betsy Russell is an American actress. She is best known for her roles in the films Private School, Tomboy, and Saw film series. Her other notable film appearances include: Let’s Do It!, Camp Fear, Delta Heat, Avenging Angel, My Trip Back to the Dark Side, and Cheerleader Camp. Betsy has also appeared as a guest-star in several television series such as Superboy, The A-Team, Superboy, Platypus Man, The Powers of Matthew Star, and Murder, She Wrote. Born Elizabeth Russell on September 6, 1963 in San Diego, California, to parents Constance Lerner and Richard Russell, she has three sisters and a brother. She had the desire of becoming an actress from very early on and started acting in school plays. She graduated from Mission Bay High School in 1981, and completed a masters program in Spiritual Psychology at the University of Santa Monica. From 1989 until 2001, Betsy was married to actor Vincent Van Patten, son of Dick Van Patten. The couple had two sons, Richard and Vincent. 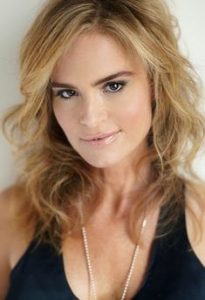 Betsy Russell Facts:
*She was born on September 6, 1963 in San Diego, California, USA.
*Her father was the iconic economist Richard Russell.
*She started her acting career at the age of 16 riding a horse in a Pepsi commercial.
*She made her film debut in Let’s Do It! (1982).
*She starred as “Jill Tuck,” the ex-wife of the Jigsaw Killer in the “Saw” film series.
*She holds a real-estate license and is a certified hypnotist.
*Visit her official website: www.imbetsyrussell.com
*Follow her on Twitter and Instagram.