Betty White is an American actress and comedian, who is most famous for her roles as Sue Ann Nivens on The Mary Tyler Moore Show and Rose Nylund on The Golden Girls. She’s played memorable roles in such films as Lake Placid, Ponyo, The Proposal, Advise & Consent and The Lorax. She is the recipient of several accolades, including six Emmy Awards. She received the Screen Actors Guild Life Achievement Award in 2009. She became the oldest person to host Saturday Night Live at 88 years old, in May of 2010. Born Betty Marion White on January 17, 1922 in Oak Park, Illinois, she is the only child of Tess Curtis and Horace Lawrence White. She belongs to Danish, Greek, English, and Welsh descent. She graduated from Beverly Hills High School in Beverly Hills, California, in 1939, at age 17. She has been married three times. She does not have any biological children. 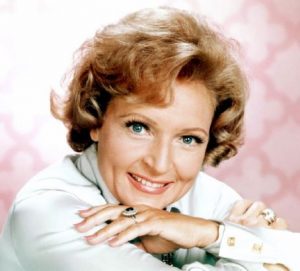