Kevin Hart is an American comedian and actor born in Philadelphia, Pennsylvania. He is most famous for his stand-up specials I’m a Grown Little Man, Laugh at My Pain, and Seriously Funny. He has also starred in such films as Scary Movie 3, In the Mix, Little Fockers, Paper Soldiers, Ride Along and Ride Along 2. Born Kevin Darnell Hart on July 6, 1978 in Philadelphia, Pennsylvania, to Nancy Hart and Henry Robert Witherspoon, he was raised by his mother. He has one older brother, Robert Hart. He has been married to Eniko Parrish since August 13, 2016. He was previously married to Torrei Hart from 2003 until 2011. 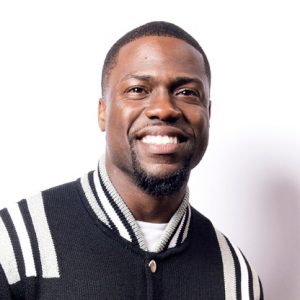 Kevin Hart Facts:
*He was raised by single mother.
*His father was a cocaine addict and so went to jail multiple times.
*He used to work as a shoe salesman in Brockton, Massachusetts.
*His role models are Bill Cosby, Chris Rock, Dave Chappelle, and Eddie Murphy.
*He was arrested for drunk and drive suspicion on April 14, 2013.
*Time Magazine named him one of the 100 most influential people in the world on the annual Time 100 list in 2015.
*He is good friends with Jason Segel.
*Visit his official website: www.kevinhartnation.com
*Follow him on Twitter, Facebook and Instagram.