Donald Glover is an American actor, writer, rapper, and stand-up comedian. He is best known for his role as Troy on the comedy series Community in which he plays an athlete in a rather odd study group, opposite Chevy Chase and Joel McHale. He is also famous for his portrayal of Earnest “Earn” Marks in the FX series Atlanta, for which he won Golden Globe Awards for Best Comedy TV Series and Best Actor in 2017. He’s played memorable roles in such films as The Martian, Magic Mike XXL and Mystery Team. Glover released his debut album, Camp, in 2011, followed by his second album, Because the Internet in 2013 and “Awaken, My Love!” in 2016. Born Donald McKinley Glover on September 25, 1983 in Edwards Air Force Base, California, to Beverly and Donald Glover, Sr., he grew up in Stone Mountain, Georgia. He is a New York University graduate with a degree in dramatic writing. 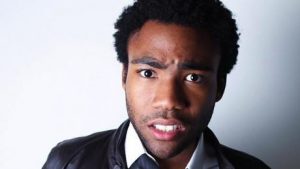 Donald Glover Facts:
*His dad is a retired postal worker and his mom is a retired daycare provider.
*He started his career writing with Tina Fey for the NBC comedy 30 Rock.
*He became the 2nd African-American performer to win an Emmy for Outstanding Lead Actor in a Comedy Series.
*Follow him on Twitter, Facebook and Myspace.