English actress and former singer who first appeared as a performer in Scratchy & Co, aged 13. Piper released her debut single, “Because We Want To”, which debuted at #1 at age 15. Her follow-up single “Girlfriend” also debuted at #1. Piper’s debut studio album, Honey to the B (1998), was certified platinum by the British Phonographic Industry. As an actress, she played the role of Rose Tyler, a companion to the Doctor in the BBC sci-fi series Doctor Who (2005–2006). She reprised the role in 2008, 2010, and 2013. She also starred as the high-flying escort Belle de Jour in the television drama series Secret Diary of a Call Girl and as Brona Croft/Lily in the Showtime horror series Penny Dreadful. In 2018, Piper played Karen Mars in Netflix Original series Collateral, for which she was nominated for a British Academy Television Award for Best Supporting Actress. She has also played prominent roles in the films Things to Do Before You’re 30, Mansfield Park, City of Tiny Lights and Eternal Beauty. Born Billie Paul Piper on September 22, 1982 in Swindon, United Kingdom, to parents Paul Victor Piper and Mandy Kane Kent, she has one younger brother named Charlie, and two younger sisters named Harley and Elle. Piper studied at the prestigious Sylvia Young Theatre School. Her career began when she was selected to appear on the Saturday-morning children’s television show Scratchy & Co. She has been in a relationship with Johnny Lloyd since June 2016. She was previously married to Chris Evans from 2001 to 2007 and Laurence Fox from 2007 to 2016. 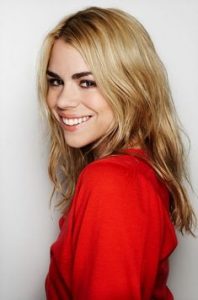 Billie Piper Facts:
*She was born on September 22, 1982 in Swindon, United Kingdom.
*Her parents are Paul Victor Piper and Mandy Kane Kent.
*Her debut single “Because We Want To”, made her the youngest artist to enter at #1 on the UK Singles Chart.
*In 2003, she abandoned her music career to focus on an acting career.
*She has been labeled the “Pop Princess” of England, United Kingdom.
*She was ranked #72 in the 2011 FHM list of “100 Sexiest Women in the World”.
*Visit her official website: www.billiepiperofficial.com
*Follow her on Twitter, Facebook and Instagram.