Brandi Glanville is an American television personality, former model and the author of two books. She is best known for her appearances on the reality television series The Real Housewives of Beverly Hills. She has also appeared on Celebrity Big Brother, Celebrity Apprentice, Famously Single, and My Kitchen Rules. As a model, she appeared on the glossy pages of fashion magazines including Glamour and Cosmopolitan, and worked for several advertisements under leading brands such as, Chanel, Giorgio Armani, and Gucci. Born Brandi Lynn Glanville on November 16, 1972 in Salinas, California, to Judith Ann and Guy Glanville, she grew up in Sacramento, California. She has a younger brother, Michael, and an older sister, Tricia. She started modeling at the age of 16. She married actor Eddie Cibrian in 2001, and the couple had two sons named Mason and Jake before getting divorced in 2010. 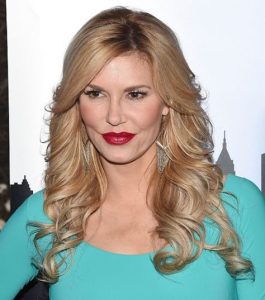 Brandi Glanville Facts:
*She was born in Salinas and raised in Sacramento, California.
*She is the middle of three children.
*She joined Celebrity Big Brother in 2017.
*She is a #1 New York Times bestselling author.
*She is good friends with Jennifer Gimenez.
*Visit her official website: www.brandiglanville.com
*Follow her on Twitter, Facebook and Instagram.