Bo Derek is an American actress, model and a sex symbol of the 1970s and 1980s. Her breakthrough role was in 1979 as Jenny Hanley in the film 10, for which she received Golden Globe Award for Best New Star nomination. She is also known for her roles in Tarzan, the Ape Man, and Bolero. Bo was born to Norma and Paul Collins, in Long Beach, California, USA as Mary Cathleen Collins. She belongs to Dutch, English, German, Irish and Welsh descent. She has been in a relationship with with actor John Corbett since 2002. She was previously married to John Derek from 1976 until his death (1998). 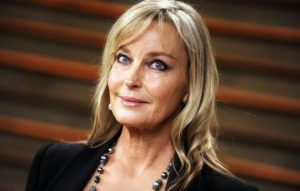 Bo Derek Facts:
*She is the eldest of four children of her parents.
*She is an animal rights activist.
*She is a supporter of the Republican Party.
*Her sister Kerry is her longtime assistant.
*Follow her on Twitter.