Bono is an Irish singer best known as the lead singer of Irish rock band U2. U2 have sold over 157 million albums and won numerous awards, including 22 Grammys. He’s also known for participating in global charity efforts. Bono was born Paul David Hewson on May 10, 1960, in Dublin, Ireland. He has been married Ali Hewson since 1982. They have four children, Eve, Jordan, Elijah and John. 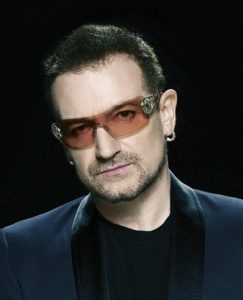 Bono Facts:
*His born name is Paul David Hewson.
*He was named the Time Person of the Year in 2005, along with Bill and Melinda Gates.
*His father died of cancer in Dublin.
*He is the only person, who has been nominated for an Oscar, Grammy, Golden Globe, and for the Nobel Prize.
*He was chess champion in school.
*Big fan of Elvis Presley.