Branch Warren is an American IFBB professional bodybuilder who finished runner-up at the 2009 Mr. Olympia. He also won the Arnold Classic in 2011 and 2012. He is the face of the magazine Muscular development. Born William Branch Warren on February 28, 1975 in Tyler, Texas, he is a sponsored athlete by Gaspari Nutrition (previously by CellTech). He is married to IFBB professional fitness competitor Trish Warren with whom he has a daughter, Faith Lea. 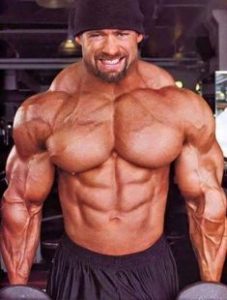 Branch Warren Facts:
*He was born on February 28, 1975 in Tyler, Texas, USA.
*He trains at the Metroflex Gym in Arlington, Texas with Johnnie Jackson. Both are also trained with Matt Kroc.
*He placed second at the 2009 Mr. Olympia.
*He is a two-time Arnold Classic winner, having won in 2011 and 2012.
*In January 2016, Warren was appeared on the cover of Muscular Development magazine.
*He owns a gym and freight company.
*Visit his official website: www.thebranchwarren.com
*Follow him on Twitter, Facebook and Instagram.