Jamie Vardy is an English professional footballer who plays as a striker for Premier League club Leicester City and the England national team. He is considered to be one of the best strikers in Premier league. Vardy won the premier league title with Leicester in 2016. Born Jamie Richard Gill on January 11, 1987 in Sheffield, to parents Lisa Vardy and Richard Gill, he grew up in the Hillsborough area of inner-city Sheffield. He attended Thomas Rotherham College. He is married to Rebekah Vardy. Vardy has four biological children, three with his wife, and one from a previous relationship. He is also a stepfather to two children from his wife’s previous relationships. 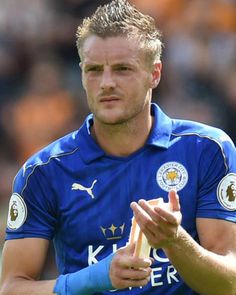 Jamie Vardy Facts:
*He was born on January 11, 1987 in Sheffield, UK.
*His mother worked at a solicitors and his father was a crane worker.
*He started his footballing career at the age of sixteen, playing for Stockbridge Park Steels youth system.
*She signed for Championship side Leicester City in May 2012.
*He made his international debut for England in June 2015 and was selected for UEFA Euro 2016 and the 2018 FIFA World Cup.
*He is a lifelong fan of Sheffield Wednesday, the club in his hometown.
*He is an ambassador for Dorothy Goodman School, a special needs school in Hinckley, Leicestershire.
*Follow him on Twitter and Instagram.