Kim Soo-hyun is a South Korean actor. He is best known for television roles such as Song Sam-dong in Dream High, King Lee Hwon in Moon Embracing the Sun, Do Min-joon in My Love from the Star, Baek Seung-chan in The Producers, Moon Gang-tae in It’s Okay to Not Be Okay, as well as film roles such as Zampano in The Thieves, Won Ryu-hwan / Bang Dong-gu in Secretly, Greatly, and Jang Tae-young in Real. He was named Gallup Korea’s Actor of the Year in 2014. Born on February 16, 1988 in Seoul, South Korea, he is the only child of his parents was raised alone by his mother from his late childhood. He has a half-sister named Kim Ju Na. 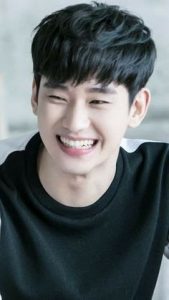 Kim Soo-Hyun Facts:
*He was born on February 16, 1988 in Seoul, South Korea.
*His father was the lead singer of the 80’s band “Seven Dolphins”.
*He majored in theater and film studies at Chung-Ang University.
*From 2013 to 2014, he starred as the young king Lee Hwon in the drama Moon Embracing the Sun.
*The business magazine’s Asia edition named him in its 30 under 30 in 2016.
*Visit his official website: www.soo-hyun.com
*Follow him on Instagram.