Born Stephanie Gregory Clifford on March 17, 1979 in Baton Rouge, Louisiana, to parents Sheila and Bill Gregory, her parents got divorced when she was four years old. Daniels is of Half Cherokee Indian and half Irish descent. She attended Scotlandville Magnet high school, graduating in 1997. Daniels started stripping at a local club when she was 17 years old. Her first television appearance was on the HBO documentary series Real Sex. In 2010, she began dating Glendon Crain, with whom she had a daughter, Caden Crain in January 2011. She was previously married to Pat Myne and Mike Moz. Daniels has recorded 311 films as an actress. 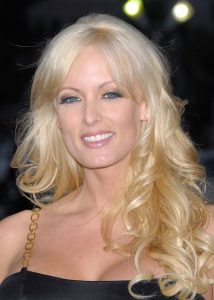 Stormy Daniels Facts:
*She was born on March 17, 1979 in Baton Rouge, Louisiana, USA.
*She was raised by her mother.
*She is a 1997 graduate ofScotlandville Magnet High School.
*She took her stage name after Motley Crue member Nikki Sixx’s daughter, Storm.
*She has been a member of the Republican party since 2010.
*She was ranked #1 in the World by Genesis Top 100 and The New Queen of X by Girls of Penthouse magazine.
*In 2014, she was inducted into the AVN Hall of Fame and the XRCO Hall of Fame.
*She was the editor of the school newspaper while in high school.
*She allegedly had an affair with US President Donald Trump in 2006.
*Visit her official website: www.stormydaniels.com
*Follow her on Twitter and Instagram.