Brandi Williams is an American singer and actress, best known as a member of the girl group Blaque, whose debut album Blaque (1999) sold more than 1.5 million copies and was certified Platinum. Billboard named Blaque as the fourth “Best New Artist” in 1999. She is also known for her role as Lafred in Bring It On. Born Brandi Danielle Williams on October 5, 1982 in Detroit, Michigan, to parents Danny and Hope Williams, she relocated to Atlanta, Georgia when she was ten. She has been married to entrepreneur Jay Harris since May 23, 2009. 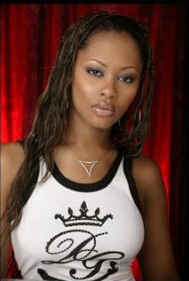 Brandi Williams Facts:
*She was born on October 5, 1982 in Detroit, Michigan, USA.
*She is the niece of Cherrelle.
*Member of the singing trio Blaque with Shamari Fears and Natina Reed.
*Brandi, Natina, and Shamari starred in the 2000 film Bring It On as members of the Clovers cheerleading squad alongside Gabrielle Union.
*As a solo artist, she released her debut song in 2011 with the song Love It.
*Visit her official website: www.brandidwilliams.com
*Follow her on Instagram.