Breanna Stewart is an American professional basketball player who plays for the Seattle Storm of the Women’s National Basketball Association. She was drafted first overall pick in the 2016 WNBA. She was named the Naismith College Player of the Year three times. She played for her high school basketball team while she was still in eighth grade. In 2014, she won a FIBA World Championship with Team USA. Born Breanna Mackenzie Stewart on August 27, 1994 in Syracuse, New York, USA, she is the daughter of Heather and Brian Stewart. 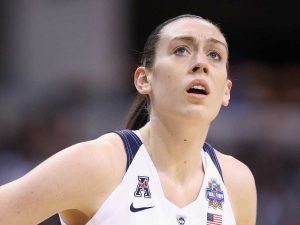 Breanna Stewart Facts:
*She started playing basketball at an early age.
*She was the Naismith Player of the Year in 2012 and a McDonald’s All-American selection.
*With the Connecticut Huskies women’s basketball team, she won four national championships.
*She revealed she was sexually abused as a child. (2017)
*Visit her official website: www.breannastewart.com
*Follow her on Twitter, Facebook and Instagram.