Brett Lee is an Australian former international cricketer. Lee played all three formats of the game and was considered one of the fastest bowlers in the world. He played for the Australian national cricket team, New South Wales Blues, Kings XI Punjab, Wellington, Kolkata Knight Riders, Sydney Sixers, and Otago. In 2015, Lee retired with 310 Test wickets and 380 ODI wickets and scored more than 1,000 runs in both formats. He became a commentator for Channel Nine after retirement. Lee has also worked as a bowling coach for Sri Lanka and Ireland. Born on November 8, 1976 in Wollongong, New South Wales, Australia, to parents Helen and Bob Lee, he has two brothers, one older, Shane and one younger, Grant. He married Elizabeth Kemp in 2006, and the couple had a son named Preston in November 2006 before getting divorced in 2009. He married Lana Anderson in 2014. 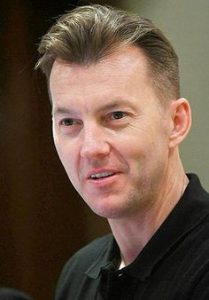 Brett Lee Facts:
*He was born on November 8, 1976 in Wollongong, New South Wales, Australia.
*He is the second of 3 boys and first played cricket with his brothers.
*He played for Australia’s U17 and U19 teams.
*He made his Test debut in December 1999 and his ODI debut in January 2000.
*He was named the Australian Test Player of the Year in 2008.
*He had played in 76 Tests, 221 ODIs and 25 T20Is.
*His fastest delivery was at 161.1 km/h.
*He owns his own clothing line called BL.
*He is good friends with cricketers Andrew Flintoff (English cricketer) and Shoaib Akhtar (Pakistani fast bowler).
*Visit his official website: www.brettlee.com.au
*Follow him on Twitter, YouTube, Facebook and Instagram.