Russian former figure skater who is a two-time World champion, two-time Olympic medalist, seven-time European champion, a four-time Grand Prix Final champion and a four-time Russian national champion. She won a record total of 17 titles on the Grand Prix circuit. Slutskaya is mainly known for her athletic ability, was the first female skater to land a triple lutz-triple loop combination, and for her trademark double Biellmann spin with a foot change, which she also invented. She is considered to be one of the most successful ladies’ singles skaters in Russian history. Born Irina Eduardovna Slutskaya on February 9, 1979 in Moscow, Russia, to parents Natalia and Eduard Slutsky, she began skating when she was four years old. She was educated at Moscow Academy of Physical Culture, graduating in the year 2000. She has been married twice, from 1999 to 2016 to Sergei Mikheev, with whom she has two children, and since 2018 to businessman Alexei Govyrin, with whom she has one daughter, Kira Govyrin. 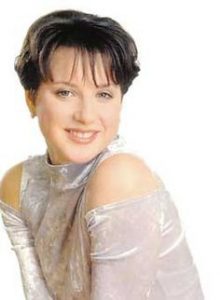 Irina Slutskaya Facts:
*Born on February 9, 1979 in Moscow, Russia, she is the only child of a Russian mother and Jewish father.
*She has had the same coach, Zhanna Gromova, since Slutskaya was six years old.
*By 1996, she was European champion and came third in the world championships (at age 17).
*She graduated from Moscow Academy of physical culture in 2000.
*Follow her on Instagram.