Bruna Abdullah is a Brazilian actress and model, who works in Bollywood. She is best known for roles such as Giselle in I Hate Luv Storys and Mary in Grand Masti. She played Sameera in Tamil film Billa II. She participated in the second season of the reality series Fear Factor: Khatron Ke Khiladi in 2009. She has also featured in numerous magazine covers, including Maxim, and Marie Claire magazines. Born Bruna Abdallah in Guaíba, Rio Grande do Sul, Brazil, on October 24, 1986, she is of Brazilian descent on her father’s side, and of Lebanese descent on her mother’s side. She was raised in Porto Alegre. She has one older sister. Her first video was with Shekhar Suman in his debut album Mere Gham Ke Dayare Mein. 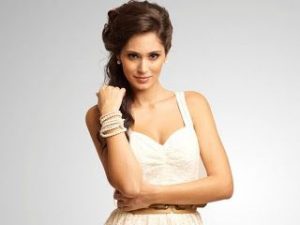 Bruna Abdullah Facts:
*Her father is Brazilian and her mother is Arabian.
*She used to work in a bank in Brazil.
*She is an animal lover and a supporter of People for the Ethical Treatment of Animals (PETA).
*For her work in Tamil movie Billa II, she won Kalakar Awards for the Best International Youth Icon Award.
*She appeared in 2007 Bollywood action film, Cash in an Item number in song “Reham Kare”.
*She is afraid of cockroaches.
*Follow her on Twitter, Facebook and Instagram.