Kimberly Williams-Paisley is an American actress who rose to prominence through her starring role in Father of the Bride (1991), and its sequel, Father of the Bride Part II (1995). She can also be recognized for her roles in According to Jim and Nashville. Her other credits include Relativity, Two and a Half Men, Alvin and the Chipmunks: The Road Chip, The Christmas Shoes, and Safe House. Born Kimberly Payne Williams on September 14, 1971 in Rye, New York, to Linda Barbara and Gurney Williams, she has a brother, Jay, and a sister, Ashley. She belongs to English, Welsh, German and French descent. She began her acting career at age 13. She graduated with a drama degree from Northwestern University in Evanston, Illinois. She has been married to country music singer Brad Paisley since March 2003. They have two children, William Huckleberry and Jasper Warren. 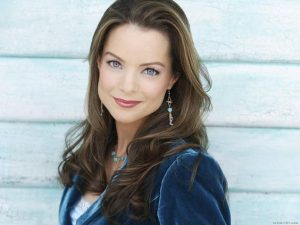 Kimberly Williams-Paisley Facts:
*She was born on September 14, 1971 in Rye, New York.
*She is the oldest of three children.
*She is of English, Welsh, German and French descent.
*Her sister, Ashley, is also an actress.
*She was once wanted to be a DJ.
*She Supported Barack Obama in the 2008 presidential election.
*Visit her official website: www.kimberlywilliams-paisley.com
*Follow her on Twitter, Facebook and Instagram.