Rihanna is a Barbadian singer and songwriter. She is best known for the hits “Umbrella,” “Take a Bow,” “SOS,” “Disturbia,” “Only Girl (In the World),” “Pon de Replay,” “We Found Love” and “Diamonds.” She has released eight studio albums and three DVDs. She released her first album, Music of the Sun, in 2005, followed by her second album, A Girl like Me in 2006. In 2007, she released her third studio album Good Girl Gone Bad, which featured the #1 hit “Umbrella,” achieved remarkable success. Her 2012 album Unapologetic reached #1 on the Billboard 200. Across her career, she has sold over 40 million albums. Her accolades include five American Music Awards, eighteen Billboard Music Awards, two BRIT Awards and seven Grammy Awards. She has had fourteen number-one singles on the Billboard Hot 100 chart. Born Robyn Rihanna Fenty on February 20, 1988 in St. Michael, Barbados, she is the daughter of Ronald Fenty, who is from Barbados, and Monica, who is from Guyana. She has two younger brothers, Rorrey and Rajad Fenty, two half-sisters and a half-brother from her father’s side, each born to different mothers from previous relationships. She grew up in Bridgetown. She would sell clothes in a street stall with her dad, who was addicted to crack cocaine. She started singing at the age of 7. She was discovered by music producer Evan Rogers while he was vacationing in Barbados with his wife Jackie. She was in a relationship with Chris Brown from 2008 to 2009. In 2017, she began dating businessman Hassan Jameel. 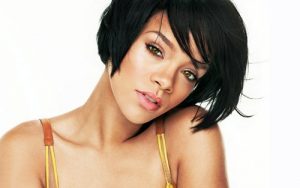 Rihanna Facts:
*Her father is of Afro-Barbadian and British Isles ancestry and her mother is Afro-Guyanese.
*She performed Mariah Carey’s single “Hero” at her school’s talent show.
*She won a beauty pageant at her school.
*She is the official sponsor for the Barbados Tourism Agency.
*She won her first Grammy Award, for “Umbrella,” in 2008.
*She ranked #8 in 2007, #15 in 2008 and #11 in 2014 in Maxim magazine’s Hot 100 Women in the World editions.
*She is a big fan of The Prodigy, Depeche Mode and Chase & Status.
*She’s the highest paid female celebrity to sit front row at fashion shows.
*She was featured on the cover of Italian Vogue for there “Extreme Couture” edition. (September 2009)
*Alicia Keys, Beyoncé and Destiny’s Child, Madonna, Mariah Carey, Janet Jackson, Whitney Houston, Gwen Stefani, Bob Marley and Brandy Norwood are her musical inspirations.
*She does smoke.
*Chemistry and Mathematics were her favorite subjects.
*She has a turtle and a Pomeranian (dog), Oliver.
*She is good friends with Katy Perry, and friends with Beyoncé and Jay Z.
*Visit her official website: www.rihannanow.com
*Follow her on Twitter, YouTube, Facebook and Instagram.