Bryan Cranston is an American actor best known for his role as Walter White in the Emmy Award-winning AMC series Breaking Bad. He is also known for his appearances on the Fox comedy series Malcolm in the Middle, and NBC comedy series Seinfeld. His notable movie credits include Trumbo, Argo, Drive, Power Rangers and Godzilla. Bryan was born as Bryan Lee Cranston on March 7, 1956 in Hollywood, California, to Audrey Peggy Sell, a radio actress, and Joe Cranston, an actor and former amateur boxer. He has been married to Robin Dearden since 1989. They have a daughter, Taylor Dearden. He was previously married to Mickey Middleton. 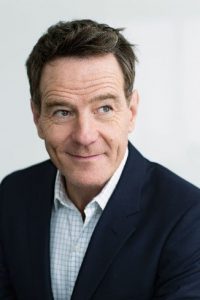 Bryan Cranston Facts:
*His ancestry includes Irish, Ashkenazi Jewish, and German.
*He has won a Golden Globe Award and 5 Emmy Awards.
*In 2014, he earned a Tony Award for Best Actor in a Play for his role Lyndon Johnson in “All the Way”.
*He has a dog named Sugar, saved from a local Los Angeles pound.
*Follow Bryan on Twitter, Facebook and Instagram.