Cailee Spaeny is an American actress who starred as Amara Namani in the 2018 science fiction follow-up Pacific Rim: Uprising. Spaeny played Rose Summerspring in the neo-noir thriller film Bad Times at the El Royale (2018). She also appeared in the biographical dramas On the Basis of Sex and Vice. In June 2016, Spaeny released her debut single “Fallin” to iTunes under Future Town Music. Born Cailee Johnamae Spaeny on July 24, 1997 in Springfield, Missouri, to parents Reja and Mark Spaeny, she has a sister named Caisha. Growing up Spaeny spent most of her time in the Springfield Little Theatre group, in concert with which she participated in many plays. 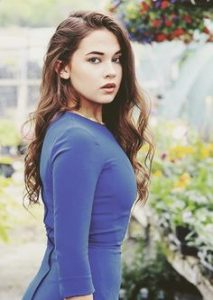 Cailee Spaeny Facts:
*She was born on July 24, 1997 in Springfield, Missouri, USA.
*Her ancestry includes Swiss-German, German, and English.
*She joined a kid’s rock cover band at age 11.
*She made her film debut in the 2016 short film Counting to 1000.
*Visit her official website: www.caileespaeny.com
*Follow her on Twitter, YouTube, Facebook and Instagram.