Cameron Diaz is an American retired actress and former fashion model. Diaz became famous after her roles in The Mask, My Best Friend’s Wedding, and There’s Something About Mary. She was nominated for four Golden Globe Awards for her roles in There’s Something About Mary, Being John Malkovich, Vanilla Sky and Gangs of New York. She was named the highest-paid actress over 40 in Hollywood in 2013. She also provided the voice of Princess Fiona in the Shrek film series from 2001 to 2010. Diaz’s other notable works include Charlie’s Angels, Bad Teacher, The Other Woman, The Sweetest Thing, In Her Shoes, The Holiday, What Happens in Vegas, My Sister’s Keeper, Knight and Day, Sex Tape, and What to Expect When You’re Expecting. Born Cameron Michelle Diaz on August 30, 1972 in San Diego, California, USA, to Billie Early and Emilio Diaz, she was raised in Long Beach, California. She has two older siblings, a sister named Chimene, and a brother, Michael. She was educated at Los Cerritos Elementary School, and Long Beach Polytechnic High School. She started modeling when she was 16 years old and appeared in ad campaigns for Calvin Klein and Coca-Cola. She has been married to Good Charlotte’s Benji Madden since January 5, 2015. 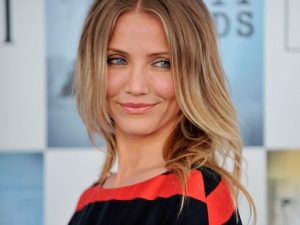