Candice Huffine is an American plus-size model who’s represented by IMG Models and has modelled for designers such as Sophie Theallet, Christian Siriano, Prabal Gurung, Tommy Hilfiger, and Tadashi Shoji. She has also appeared on the covers of major international magazines including Vogue, Elle and Harper’s Bazaar. Huffine became the first plus-size woman to be featured in the 2015 Pirelli Calendar and in 2016 she gained international attention for Lane Bryant’s #ImNoAngel campaign. 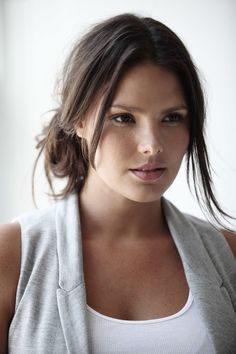 Born on October 15, 1984 in Georgetown, Washington, DC, her mother’s name is Holley Huffine. She has one younger sister named Tyler. She was educated at Bowie High School in Bowie, Maryland. Huffine signed her first modeling contract when she was 16 years old. Her first major campaign was with Lane Bryant, and she worked with them again on its “I Am No Angel” campaign. She married filmmaker Matt Powers on October 20, 2011 in Brooklyn, New York. They live in Williamsburg, Brooklyn with their dog Jerry Brows.

Candice Huffine Facts:
*Born on October 15, 1984 in Georgetown, Washington, DC, she was raised in Bowie, Maryland.
*She was a cheerleader in high school.
*She worked side jobs including being a waitress and reservationist to make ends meat while pursuing modeling.
*She signed her first modeling commercial contract in 2000.
*She became the first plus-size model to appear in Pirelli Calendar in 2015.
*She appeared in Lane Bryant #ImNoAngel campaign in 2015.
*She launched her own clothing line in collaboration with Italian brand Elena Mirò in 2015.
*She admires Alexa Chung, Leandra Medine, and Olivia Palermo.
*Follow her on Twitter and Instagram.