Carlos PenaVega is an American actor and singer. He played the role of Carlos Garcia on Nickelodeon’s Big Time Rush and is a former member of boyband Big Time Rush, and has had small roles on TV shows such as Figure It Out, The Penguins of Madagascar, Instant Mom, Love at Sea, and Enchanted Christmas. He was also the host of the network’s game show Webheads. In 2018, PenaVega was cast as Diego in The CW series Life Sentence. 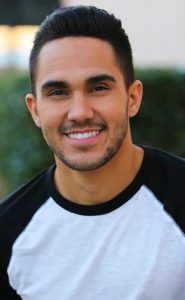 Born Carlos Roberto Peña Jr. on August 15, 1989 in Columbia, Missouri, to parents Margarita and Carlos Pena, Sr., he was raised in Weston, Florida. He is of Spanish and Venezuelan descent on his father’s side, and of Dominican descent on his mother’s side. Carlos attended Sagemont Upper School and studied musical theater at the Boston Conservatory. In August 2013, Carlos became engaged to actress and singer Alexa Vega. The couple married on January 4, 2014 in Puerto Vallarta, Mexico, both taking PenaVega as their married name. The couple shares a YouTube channel, LexLovesLos. They have two sons. Ocean King PenaVega born in December 2016 and Kingston James PenaVega born in June 2019.

Carlos PenaVega Facts:
*He was born on August 15, 1989 in Columbia, Missouri, USA.
*He moved to Hollywood in August 2009.
*He starred as Carlos Garcia on the Nickelodeon series Big Time Rush from 2009 to 2013.
*He released his debut solo single in Spanish on February 4, 2014, titled “Electrico”.
*His favorite Thing To Do On A Cruise Ship Is To Go On The Flo Rider.
*He is best Friends with George Kosturs and Nic Luken.
*He has two cats named Zero and Zira.
*He has a German Shepard named Sydney.
*Follow him on Twitter and Instagram.