Michele Placido is an Italian actor and director. He is best known for his portrayal of Corrado Cattani in the TV series La piovra. He played the lead as a police inspector investigating the Mafia in Damiano Damiani’s TV series La piovra. He also starred in Marcia trionfale and Ernesto. Placido made his directorial debut with the 1990 Italian drama film Pummarò. 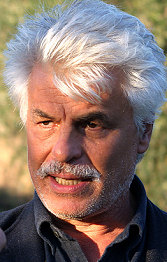 Born on May 19, 1946 in Ascoli Satriano, Italy, into a poor family, his parents are Maria and Beniamino Placido. He studied acting at the Centro Sperimentale di Cinematografia in Rome, and with Silvio D’Amico at the Academy of Dramatic Arts. He made his debut as an actor in the play Midsummer Night’s Dream in 1969. In 2012, Placido married actress Federica Vincenti after over 10 years of dating. The couple divorced in December 2017. He was previously married to Simonetta Stefanelli and Ilaria Lezzi. He has Has five children: Violante Placido, Michelangelo Placido and Brenno Placido with Simonetta Stefanelli, Inigo Placido with Virginie Alexandre, and Gabriele with Federica Vincenti.

Michele Placido Facts:
*He was born on May 19, 1946 in Ascoli Satriano, Italy.
*He made his stage debut in 1969.
*Member of the jury at the Venice Film Festival in 2006.
*He is a supporter of the center-left Italian Democratic Party (PD) led by Walter Veltroni.