Carly Foulkes is a Canadian model and actress, best known for being the “T-Mobile Girl” in a series of commercials for the company in which she wore a pink and white dress. She has also appeared on the cover of Mexico’s Elle magazine. Born on August 4, 1988 in Toronto, Ontario, Canada to Pauline Foulkes, she has two sisters named Kimmie and Angie. She began her modeling career in 2001, at age thirteen. She attended Loretto Abbey Catholic Secondary School, and later moved to New York City to model for agents. She is represented by Modelwerk and Sutherland Models. 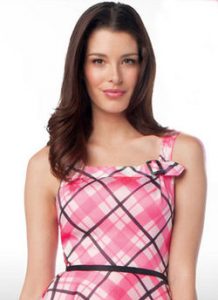 Carly Foulkes Facts:
*She was born on August 4, 1988 in Toronto, Ontario, Canada.
*She started her modeling career in 2001, at age thirteen.
*She became the T-Mobile spokesman primarily from 2010 to 2013.
*She is an avid skateboarder and video game player.
*Visit her official website: www.carly-foulkes.com
*Follow her on Twitter and Instagram.