Malin Akerman is a Swedish-Canadian actress, model, and singer. She is known for her roles in television, such as The Comeback, Childrens Hospital, Burning Love, Trophy Wife, Sin City Saints, and Billions, and in the films 27 Dresses, Watchmen, Harold & Kumar Go to White Castle, The Utopian Society, The Heartbreak Kid, I’ll See You in My Dreams, and the commercial hit Rampage. Akerman was nominated for a Saturn Award for Best Supporting Actress for her work in Watchmen. Apart from acting and occasional modelling, Åkerman had a brief music career as the lead singer of a rock band named Ozono, who later changed their name to “The Petal Stones”. Born Malin Maria Åkerman on May 12, 1978 in Stockholm, Stockholms län, Sweden, to parents Pia Sundström and Magnus Åkerman, she moved to Canada with her family when she was two years old. She has two younger half-sisters named Mikaela and Jennifer. She married Roberto Zincone in 2007, and the couple had a son named Sebastian in 2013 before getting divorced in 2014. In 2017, she became engaged to actor Jack Donnelly and the couple married in 2018. 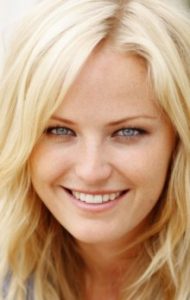 Malin Akerman Facts:
*She was born on May 12, 1978 in Stockholm, Stockholms län, Sweden.
*She moved to Canada at age two and was raised partly in Sweden and partly in Ontario.
*Her parents divorced when she was six years old.
*She wanted to become a child psychologist.
*She won the Canadian title of Ford Supermodel at age 17.
*She was ranked #80 in FHM magazine’s “100 Sexiest Women in the World 2006” supplement.
*She was ranked #59 on the Maxim magazine Hot 100 of 2008 list.
*As a child, Akerman was diagnosed with dyslexia and ADHD and still takes medication for the latter as an adult.
*Visit her official website: www.malinakerman.net
*Follow her on Twitter, Facebook and Instagram.