Catherine Deneuve is a French actress, singer, model and producer, born October 22, 1943, in 17th arrondissement, Paris, France, to French stage actors Maurice Dorléac and Renée Simonot. She became an established actress, appearing in the films The Umbrellas of Cherbourg (1964), The Young Girls of Rochefort (1967), Belle de Jour (1967), Tristana (1970), and 1992’s film Indochine, for which she was nominated for an Academy Award. 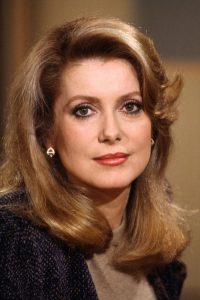 Catherine Deneuve Education:
She attended Catholic schools up to age of 12.

Catherine Deneuve Facts:
*Her parents were actors.
*She made her screen debut in 1957.
*She has never performed in the theatre due to stage fright.
*She speaks fluent French, Italian and English as well as semi-fluent German.
*She is involved with Amnesty International’s program to abolish the death penalty.
*She has a tribal tattoo on the back of her neck.
*She is a twelve-time Cesar Award nominee
*She left home at age 17 to move in with Ukrainian director Roger Vadim, who was 33 at the time.
*In 1995, she was chosen by Empire magazine as one of the 100 Sexiest Stars in film history (#38).