Lisa Faulkner is an English actress, TV personality and telly chef who won the 2010 edition of the Celebrity Masterchef. Born and raised in south west London, she was educated in Kingston. Lisa is best known for her role in Holby City, in which she played Victoria Merrick in 43 episodes (1999-2001). She has also appeared in several television series, including gritty drama Murder in Suburbia, New Street Law and Brookside. After winning Celebrity Masterchef in 2010, Lisa turned her focus to TV hosting duties, specifically cooking shows such as What’s Cooking? on Channel 4. She was married to Eastenders actor Chris Coghill (m. 2005–2011), with whom she adopted a fifteen-month-old girl, Billie. 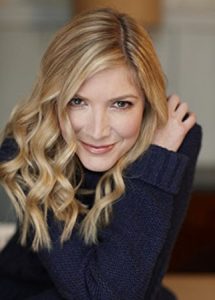 Relationships / Affairs / Boyfriend:
She is in a relationship with Australian-native John Torode since 2015.

Lisa Faulkner Education:
She was educated at Tiffin Girls’ School in Kingston upon Thames.

Lisa Faulkner Facts:
*She dropped out of school to pursue a modeling career at 16.
*She was the clear winner of 2010 Celebrity MasterChef.
*Her first book, Recipes from my Mother for my Daughter, was a Number One Sunday Times bestseller.
*She was included for 6 consecutive times in the FHM’s “100 Sexiest Women in the World” list from 1999 to 2004.
*She does teaching at Amanda Redman’s Artists Theatre School frequently.
*She lost her mother to cancer when she was just 16. Due to this reason, she has been associated with various cancer foundations.
*She set up a TV production company in collaboration with Nicola Stephenson and Angela Griffin in 2003.
*Follow her on Twitter and Instagram.