Catherine Tate is a British comedian, actress, and writer. She is best known for her work on the sketch comedy series The Catherine Tate Show, for which she has won numerous awards. She also played Donna Noble in the television series Doctor Who and had a recurring role in the U.S. version of The Office from 2011 to 2013. Catherine’s other notable works include Big Train, Mrs Ratcliffe’s Revolution, Nan’s Christmas Carol, Big School, and Catherine Tate’s Nan. She also provides the voice of Magica De Spell in the 2017 reboot of Disney’s DuckTales animated series. Born Catherine Ford on May 12, 1968 in Bloomsbury, London, England, she grew up in Bloomsbury’s iconic Brunswick Centre. Catherine was raised by her mother, Josephine, and has had no contact with her father at all. She was educated at St Joseph’s Roman Catholic Primary School in Holborn, and Notre Dame High School. She is a graduate of the Central School of Speech and Drama. Catherine began her television acting career appearing in the serial dramas The Bill and London’s Burning. She has a daughter named Erin with her former partner Twig Clark. 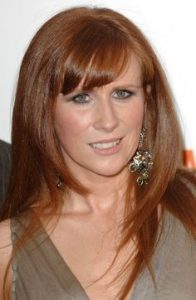 Catherine Tate Family Details:
Father: Unknown (Catherine has had no contact with her father at all.)
Mother: Josephine Ford (Was a florist)
Spouse/Husband: *
Children: Erin Johanna Clark (Daughter) (b. January 2003)
Siblings: Unknown

Catherine Tate Facts:
*She was born on May 12, 1968 in Bloomsbury, London, England, UK.
*Her mother had left her father before Catherine was born.
*She suffered from obsessive-compulsive disorder (OCD) as a child.
*She is the former member of the National Youth Theatre.
*Catherine’s famous fans include Paul O’Grady, Ricky Gervais, Dawn French and Peter Kay.
*Follow her on Facebook.