Chadwick Boseman was an American actor who played baseball player Jackie Robinson in the biographical film 42 and R&B singer James Brown in the biographical musical drama film Get on Up. He also played the superhero Black Panther in the Marvel Cinematic Universe, most notably in the 2018 film Black Panther. In 2017, Boseman portrayed Thurgood Marshall in the biographical film Marshall. Born Chadwick Aaron Boseman on November 29, 1976 in Anderson, South Carolina, to African-American parents Leroy and Carolyn Boseman, a businessman and a nurse, Boseman graduated from T. L. Hanna High School in 1995 where he played on the basketball team. He attended Howard University in Washington, D.C., graduating in 2000 with a Bachelor of Fine Arts in directing. He also attended the British American Drama Academy in Oxford, England. Boseman landed his first major role as a series regular on Persons Unknown. He died on August 28, 2020 from complications related to the illness at the age of 42. He was married to singer Taylor Simone Ledward. 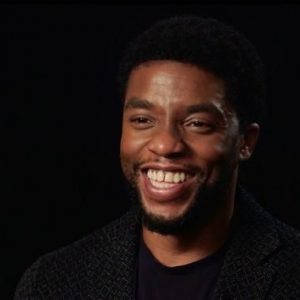 Chadwick Boseman Facts:
*Born on November 29, 1976 in Anderson, South Carolina, he was raised a Christian and was baptized.
*Denzel Washington paid for Chadwick Boseman’s tuition at Oxford University.
*He played superhero Black Panther in the Marvel Cinematic Universe (MCU) from 2016 to 2019.
*He wrote a play called Deep Azure that premiered in Chicago in 2005.
*In 2016, he was diagnosed with colon cancer.
*As the first black actor to headline an MCU film, he was named to the 2018 Time 100.
*He was a lifelong Democrat.
*He was friends with Michael B. Jordan, Reginald Hudlin, and Robert Downey, Jr.