Dave Chappelle is an American stand-up comedian, actor, producer and writer. He is best known for his iconic and acclaimed satirical comedy sketch series Chappelle’s Show (2003-2006). Chappelle played Thurgood Jenkins in the 1998 comedy film Half Baked and starred as Dave Carlisle in the ABC comedy series Buddies. In 2018, he starred as Noodles in the drama movie A Star Is Born. Chappelle’s other notable works include Mel Brooks’s Robin Hood: Men in Tights, The Nutty Professor, Con Air, You’ve Got Mail, Blue Streak, Chi-Raq, and Undercover Brother. Chappelle earned his first Emmy Award in 2017 for his guest appearance on Saturday Night Live, and received a Grammy Award for his Netflix specials The Age of Spin & Deep in the Heart of Texas in 2018. Born David Khari Webber Chappelle on August 24, 1973 in Washington, D.C., to parents Yvonne and William David Chappelle III, he has a brother named William, and a sister named Felicia. Chappelle attended Woodlin Elementary School and graduated in 1991 from Washington’s Duke Ellington School of the Arts, where he studied theatre arts. He has been married to Elaine Erfe since 2001. They have two sons, Sulayman and Ibrahim, and a daughter, Sonal Chappelle. 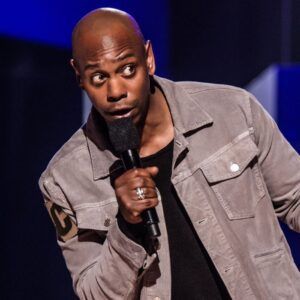 Dave Chappelle Facts:
*Born on August 24, 1973 in Washington, D.C., his parents were both professors.
*His parents separated when he was just six years old.
*He made his film debut in Robin Hood: Men In Tights in 1993.
*In 2016, he signed a $20 million-per-release comedy-special deal with Netflix.
*His accolades include four Emmy Awards, three Grammy Awards and the Mark Twain Prize.
*Rolling Stone ranked him #9 in their “50 Best Stand Up Comics of All Time” in 2017.
*He is very good friends with fellow comedian Mario Cantone.
*His wife Elaine is a Filipina.
*Follow him on Twitter, YouTube and Instagram.