American rapper who released his debut mixtape 10 Day in 2012. Chance the Rapper rose to fame in 2013 after releasing his second mixtape, Acid Rap. He received further recognition for his third mixtape Coloring Book (2016), which earned him three Grammy Awards, including the award for Best Rap Album; upon winning, it became the first streaming-only album to win a Grammy Award, and peaked at number eight on the Billboard 200 chart and was supported by the singles, “Angels” and “No Problem”. He released his debut studio album The Big Day on July 26, 2019. Apart from that Chance the Rapper is a member of the Chicago collective Savemoney, and is the vocalist for the band the Social Experiment; they released the album Surf in May 2015, led by trumpeter Nico Segal. Born Chancelor Johnathan Bennett on April 16, 1993 in Chicago, Illinois, to parents Lisa and Ken Williams Bennett, his younger brother is fellow rapper Taylor Bennett. He was educated at Jones College Prep High School. In 2019, he married Kirsten Corley. They have two children. 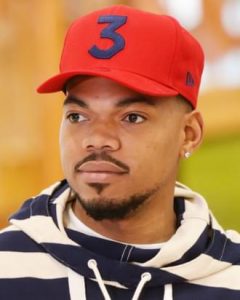 Chance the Rapper Facts:
*He was born on April 16, 1993 in Chicago, Illinois, USA.
*His father used to work for then-Senator Barack Obama.
*He recorded his first full-length project, a mixtape titled 10 Day in 2012.
*He is the first artist to be nominated for a Grammy with a streaming-only album.
*He was featured on the Justin Bieber song “Confident,” in December 2013.
*He was included on XXL Magazine’s list of 2013 Freshman Class Nominees, meant to honor the best up-and-coming MC’s.
*He is friends with Donald Glover.
*Visit his official website: www.chanceraps.com
*Follow him on Twitter, SoundCloud, YouTube, Facebook and Instagram.