Charisma Carpenter is an American actress. She is best known for her portrayal of Cordelia Chase in the supernatural drama series Buffy the Vampire Slayer and its spin-off series Angel. Other notable acting roles include Kyra in Charmed, Kendall Casablancas in Veronica Mars, Rebecca Sewell in The Lying Game, and Lacy in The Expendables film series. Born Charisma Lee Carpenter on July 23, 1970 in Las Vegas, Nevada, to parents Christine and Don Carpenter, she is of Spanish, French and German descent. She has two older brothers, Troy and Kenny. She was scouted by a commercial agent while working as a waitress in Los Angeles to save for her college education. She married Damian Hardy in 2002, and they had a son named Donovan Charles in 2003 before getting divorced in 2008. 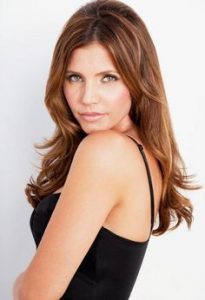 Charisma Carpenter Facts:
*She was born on July 23, 1970 in Las Vegas, Nevada, USA.
*She studied classical ballet from age five.
*She was an NFL cheerleader for the San Diego Chargers’ football team.
*She used to work as an aerobics instructor and in property management.
*She is friends with Susan Ward, Nicholas Brendon, David Boreanaz and James Marsters.
*She has a rosary tattoo on her left wrist.
*She was named after an Avon perfume.
*Her hobbies include roller blading, rock climbing, hiking and sky diving.
*She writes poetry.
*Follow her on Twitter, Facebook and Instagram.