Victoria Justice is an American actress and singer. She is best known for television roles such as Lola Martinez in Zoey 101, Tori Vega in Victorious, Lindy Sampson in Eye Candy, as well as film roles such as Wren DeSantis in Fun Size, Naomi in Naomi and Ely’s No Kiss List, Betsy in Adventures in Appletown, and Kathy Weider in Bigger. She also starred as Jordan Sands in the 2010 Nickelodeon television movie The Boy Who Cried Werewolf. Justice released her debut single “Gold” in June 2013. Born Victoria Dawn Justice on February 19, 1993 in Hollywood, Florida, to parents Serene and Zack Justice, she is of English, German, and Irish descent on her father’s side, and of Puerto Rican descent on her mother’s side. She has a younger half-sister named Madison Grace Reed. Justice and her family moved from Hollywood, Florida to Hollywood, California when she was 10 years old. She began her acting career in 2003 appearing on Gilmore Girls as Jill #2. She has dated Josh Hutcherson, Nicholas Hoult, Ryan Rottman, Pierson Fode, and Reeve Carney. 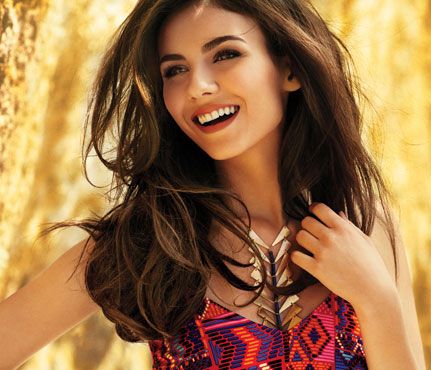 Victoria Justice Facts:
*She was born on February 19, 1993 in Hollywood, Florida, USA.
*Her ancestry includes Puerto Rican, Irish, English, German, and French.
*From 2003 to 2009, she starred as Lola Martinez on the TV show Zoey 101, for which she won Young Artist Awards in 2006 and 2007 for Best Young Ensemble Performance in a TV Series.
*She has recorded several songs for the soundtracks of her acting projects, including Victorious and the Nickelodeon musical Spectacular!.
*Her favorite actresses are Hilary Swank, and Juliette Lewis.
*She likes to listen to Colbie Caillat, The Beach Boys, The Rolling Stones, Sara Bareilles and Coldplay.
*Michael Jackson, Madonna, Britney Spears, Pink, Sara Bareilles, Coldplay, No Doubt, The Jackson 5, The Beatles, Amy Winehouse, Lily Allen, Hall & Oates, Billy Joel, Carly Simon, Karen Carpenter, Elton John, Alanis Morissette, Carole King and Diana Ross are her musical inspirations.
*She is best friends with Avan Jogia.
*She has a dog named Sophie.
*Follow her on Twitter, YouTube, Facebook and Instagram.