China Anne McClain is an American actress and singer. She is best known for starring as Jazmine Payne in the television series Tyler Perry’s House of Payne, Charlotte McKenzie in the film Grown Ups, Chyna Parks in the Disney Channel television series A.N.T. Farm, and as Uma in the Disney Channel films Descendants 2 and Descendants 3. In 2018, McClain began starring as Jennifer Pierce / Lightning in The CW’s Black Lightning. She began her musical career in 2005 as a member of the sister girl group the 3mcclaingirls with her sisters Sierra and Lauryn. McClain’s debut single as a solo artist was “Dynamite” which peaked at #2 on the US Kid Digital Songs, and her second single, “Calling All the Monsters”, peaked at #1 on the same chart. 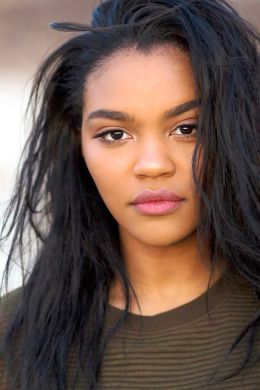 Born on August 25, 1998 in Decatur, Georgia, to African American parents, Michael McClain, a music producer, and Shontell, a songwriter and former screenwriter. She has two older sisters, Lauryn and Sierra, who are also actresses and singers, and has a younger brother, Gabriel. At the age of seven, McClain was cast in the film The Gospel, and then China James in Daddy’s Little Girls.

China Anne McClain Facts:
*She was born on August 25, 1998 in Decatur, Georgia, USA.
*Her father, Michael McClain, is a music producer who produced Solange Knowles’ debut album Solo Star (2002).
*In 2005, McClain was discovered by a music executive who heard her singing and encouraged director Rob Hardy to audition her for his 2005 feature film The Gospel.
*Her hobbies include singing, dancing, drawing elaborate greeting cards and going to church with her family.
*She enjoys memorizing the lines of various Disney movies and loves to audition.
*She cites her parents as her biggest influences.
*Follow her on Twitter, YouTube, Facebook and Instagram.