Chris Gayle is a Jamaican cricketer who captained the West Indies’ Test side from 2007 to 2010. He is widely regarded as one of the greatest batsmen ever in Twenty20 cricket, and has set numerous records across all three formats of the game. He played cricket for West Indies, Jamaica, Stanford Superstars, ICC World XI, Kolkata Knight Riders, Royal Challengers Banglore, Western Australia, Sydney Thunder, Matabeleland Tuskers, and Worcestershire. A left-handed batsman, Gayle has scored 42 international centuries, which includes 15 Tests, 25 ODIs and 2 T20I centuries. He was the first cricketer to score centuries in all formats of the game. 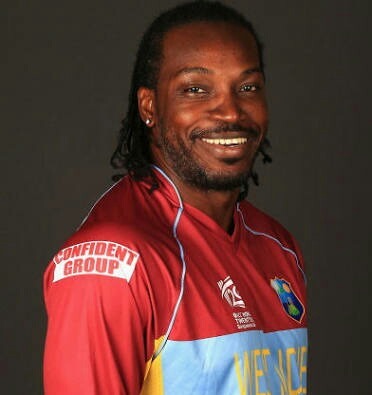 Chris Gayle Facts:
*He was born on September 21, 1979 in Kingston, Jamaica.
*His full name is Christopher Henry Gayle.
*He started his cricket career with Lucas Cricket Club in Kingston, Jamaica.
*He made his Test debut in March 2000 against Zimbabwe, scoring 33 and 0.
*He made his ODI debut in 1999 against India.
*He last played in a Test match in September 2014, against Bangladesh.
*He is one of four players to score two triple centuries in Test cricket.
*He launched his autobiography ‘Six Machine – I don’t like cricket, I love it’ in September 2016.
*He has an estimated net worth of $15 million according to Forbes.
*Follow him on Twitter, YouTube, Facebook and Instagram.