Chris Klein is an American actor. He is best known for starring as Paul Metzler in Election, Chris ‘Oz’ Ostreicher in the American Pie comedy teen films, and the serial killer Cicada on The Flash. In 2020, Klein began starring as Bill Townsend in the Netflix series Sweet Magnolias. Klein’s other notable works include The Six Wives of Henry Lefay, Rollerball, Wilfred, Street Fighter: The Legend of Chun-Li, New York City Serenade, and Day Zero. 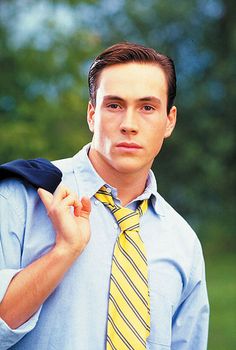 Born Frederick Christopher Klein on March 14, 1979 in Hinsdale, Illinois, to parents Terese and Fred Klein, he is the middle child of three, with an older sister named Debbie and younger brother named Timothy. He was educated at Millard West High School. He has been married to Laina-Rose Thyfault since August 10, 2015. They have two children; a son named Frederick Easton and a daughter named Isla Rose.

Chris Klein Facts:
*Born on March 14, 1979 in Hinsdale, Illinois, he is of German, Irish, and English descent.
*He sang in the school choir, ran on the track-and-field team, and starred in the drama club’s production of West Side Story.
*He was discovered in his high school by director Alexander Payne who was busy casting his upcoming film, Election.
*He was once engaged to actress Katie Holmes.
*He was in a relationship with Ginnifer Goodwin from 2006 to 2008.
*He was arrested for drunk driving on February 5, 2005, in San Diego County and again in Los Angeles on June 16, 2010.
*Follow him on Twitter, Facebook and Instagram.