Chris Pine is an American actor born in Los Angeles, California. He is best known for his portrayal of Steve Trevor in Wonder Woman (2017) and as James T. Kirk in the 2009 movie Star Trek. He can also be recognized for his role in Unstoppable, This Means War, Rise of the Guardians, Into the Woods and Hell or High Water. Born Christopher Whitelaw Pine on August 26, 1980 in Los Angeles, California, to Robert Pine and Gwynne Gilford, he belongs to Russian Jewish, English, German, Welsh, and French descent. He has a sister, Katherine Pine. He earned his bachelor’s degree in English from University of California (2002). He was in a relationship with actress Olivia Munn from 2009 to 2010. 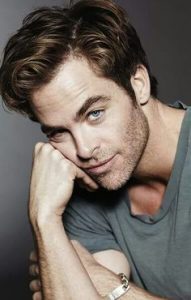 Chris Pine Facts:
*He is the son of actors Robert Pine and Gwynne Gilford and grandson of Anne Gwynne and Max M. Gilford.
*He made his debut role in ER in 2003.
*He was ranked #27 on Entertainment Weekly’s “30 Under 30” the actors list in 2008.
*He enjoys skeet shooting.