Lindsay Wagner is an American actress of film and television. She is most famous for her portrayal of Jaime Sommers in the 1970s TV series Bionic Woman, for which she won an Emmy for Outstanding Lead Actress in a Drama Series. She first gained attention with her role Susan Fields in the 1973 film ‘The Paper Chase’. She played Rebecca Cafferty in the television drama series A Peaceable Kingdom. Born Lindsay Jean Wagner in Los Angeles, California, on June 22, 1949, to Marilyn Louise and William Nowels Wagner, her parents got divorced when she was seven years old. She worked as a model before she started her acting career. She has been married four times. With her third husband, Henry Kingi, she had two sons before divorcing in 1984. 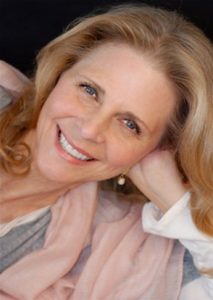 Lindsay Wagner Facts:
*Her father was a school photographer and her mother was a building contractor.
*Her parents divorced when she was seven years old.
*She was spokesperson for Sleep Number beds (2003-2009).
*She is a Vegan.
*She is longtime friend of Richard Anderson.
*Visit her official websites: www.lindsaywagner.com, www.lindsaywagnerinternational.com
*Follow her on Twitter and Facebook.