Jill Wagner is an American actress, model, and TV personality. She is best known as the co-host of the ABC comic competition show Wipeout from 2008 to 2014. She can also be recognized for her television roles in Teen Wolf and Blade: The Series. Born as Jill Suzanne Wagner on January 13, 1979 in Winston-Salem, North Carolina, to David Wagner, she has one older brother, Brandon Wagner. She earned her bachelor’s degree in Business Management from North Carolina State University (2001). She moved to California right after finishing college to pursue her modeling career. She has been married to David Lemanowicz since April 8, 2017. 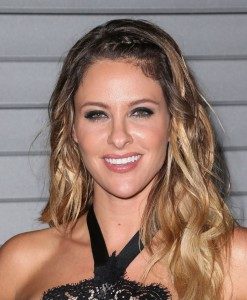 Jill Wagner Facts:
*Her mother passed away when she was young.
*She was mostly raised by her grandmother and father.
*She is best known for co-hosting the comic competition show, Wipeout on ABC.
*She was ranked #90 on the Maxim Hot 100 Women for the year 2004.
*Follow her on Twitter, Facebook and Instagram.