Chris Santos is an American professional chef, best known as the former executive chef and owner of The Stanton Social in New York’s Lower East Side. Santos opened Beauty & Essex, a 250-seat, 10,000-square-foot restaurant in the heart of the lower east side in late 2010. He is a recurring guest judge on the Food Network show Chopped, and is developing a show of his own. 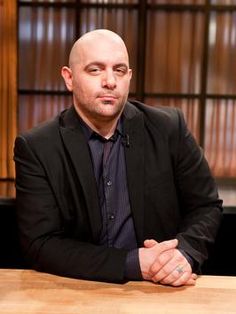 Born on March 26, 1971 in Fall River, Massachusetts, Santos is the youngest of four children, with two brothers and one sister. He is of Portuguese descent on his father’s side, and of Irish descent on his mother’s side. Santos graduated in 1989 from Bristol High School in Bristol, Rhode Island, and studied culinary arts at Johnson & Wales University in Providence, Rhode Island, initially planning on attending for only two years. He married Taryn Santos in 2009.

Books: Share: Delicious and Surprising Recipes to Pass Around Your Table

Chris Santos Facts:
*Born on March 26, 1971 in Fall River, Massachusetts, he is of Portuguese and Irish descent.
*At age 13, his first job in the kitchen was washing dishes at a small local restaurant in his hometown of Bristol, Rhode Island.
*He served as a judge on the Food Network reality series Chopped.
*He became executive chef at award-winning Latin restaurant Suba in 2013.
*Visit his official website: www.thisischrissantos.com
*Follow him on Twitter, Facebook and Instagram.