Christina Aguilera is an American singer, songwriter, actress and television personality. Aguilera rose to stardom with her hit song “Genie in a Bottle,” which achieved remarkable success, reaching #1 on the Billboard Hot 100 and was certified platinum. Her other hits include “What a Girl Wants,” “Dirrty,” “Come on Over Baby,” and “Lady Marmalade.” Her accolades include five Grammy Awards, one Latin Grammy Award, and a star on the Hollywood Walk of Fame. Born Christina Maria Aguilera on December 18, 1980 in Staten Island, New York, USA to Shelly Loraine and Fausto Xavier Aguilera, she grew up in Rochester and Wexford, Pennsylvania. She is of Ecuadorian descent on her father’s side, and of Dutch, German, Irish, and Welsh descent on her mother’s side. She had a son named Max Liron with music executive Jordan Bratman, whom she was married to from 2005 to 2011. She had a daughter named Summer Rain Rutler in August 2014 with her fiancé Matt Rutler. 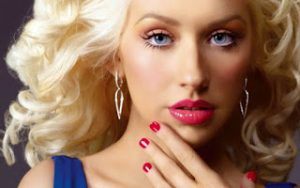 Christina Aguilera Facts:
*She was born in Staten Island, New York, and grew up in Rochester and Wexford, Pennsylvania.
*She started her career as a cast member on The All New Mickey Mouse Club.
*She was a contestant on Star Search.
*She won a Grammy Award for “Best New Artist” in 2000.
*She became a coach on the singing-competition show The Voice.
*She cites Mariah Carey, Whitney Houston, and Janet Jackson as her musical influences.
*Her studio albums include Christina Aguilera, Mi Reflejo, My Kind of Christmas.
*She was ranked #13 in Stuff magazine’s “102 Sexiest Women in the World” (2002).
*Visit her official website: www.christinaaguilera.com
*Follow her on Google+, Twitter, YouTube, Facebook and Instagram.