Lea Seydoux is a French actress. She is best known for her roles in the films Blue Is the Warmest Colour, The Beautiful Person, Inglourious Basterds, Mission Impossible: Ghost Protocol and Spectre. For her role as Junie in The Beautiful Person, she won the 2009 Chopard Award for Best Upcoming Actress. Born Léa Hélène Seydoux-Fornier de Clausonne on July 1, 1985 in Paris, France, to Valérie Schlumberger and Henri Seydoux, she was raised in Saint-Germain-des-Prés in the 6th arrondissement. She started her acting career in French cinema, appearing in the films The Last Mistress and On War. She is in a relationship with André Meyer since 2013. They have a son together, George Meyer. 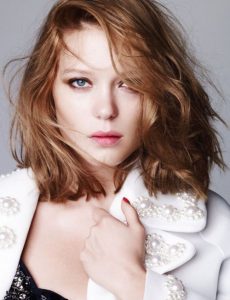 Lea Seydoux Facts:
*Her parents divorced when she was three years old.
*She began her acting career in 2006.
*She wanted to be an opera singer as a child.
*She won the Palme d’Or at the 2013 Cannes Film Festival.
*She was named on Vogue (UK) magazine’s Best Dressed List in 2013.
*Follow her on Twitter, Facebook and Instagram.